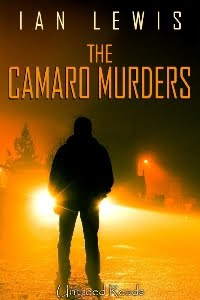 The Camaro Murders by Ian Lewis

The Camaro Murders chronicles the perspective of four personalities adrift in the wake of a small town tragedy.

When a local girl disappears, Sheriff Eustace Hildersham focuses on the suspect vehicle--a black Camaro. Behind the wheel of the Camaro, a murdered soul known as The Driver wanders between the living and the dead, at odds with himself and the girl's killer.

Culver Crisp, the girl's childhood friend, shoulders the guilt of having put her in harm's way as well as the knowledge he should have died too.

August Burroughs, the victim of an unrelated murder, is drawn into the Driver's world and must choose a side in a secret fight for Culver's soul.

Sheriff Eustace Hildersham is still haunted by these events thirteen years later, fearing that he'll never be able to put the case to rest, when the Driver's phantom Camaro suddenly returns to the area. As Hildersham struggles to make sense of bizarre clues and the Driver's appearances, he continues to probe until he unearths the fragmented truth of the events of that winter.

"The Camaro Murders was one of those books that kept me turning the 'Kindle' page, while making me impatient to find out what happens next..." -Amazon Reviewer