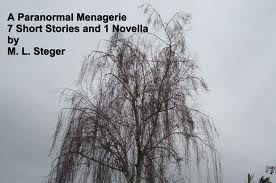 This collection of paranormal horror stories are to frighten and delight the audience. Some contain elements of humor; others insights into what we fear. But if you like horror and humor mixed together, these stories should entertain and please the reader. The stories deal with magic, revenants, vampires, demons and other things that may go "bump" in the night.

A Bad Night in a German Tavern: When travelling to unfamiliar places, be careful where you wander off to, and where you may end up.

Ghost Lights: Have you ever wondered what makes up ghost lights? Here's one idea.

Sheriff's Got a Way About Her: Sheriff McMurry has a secret to keep her town free of criminals. But Office James isn't sure he wants to know her secret.

Devil's in the Details: Micky's business isn't doing so well, and dealing with the devil doesn't help.

Horns: Careful which costume you pick out for Halloween.

Charlie's Problem: Charlie has a poltergeist problem but it disappears when Mags is around. What is Charlie's problem?

Demoniac and the Single Girl: Doris Day never had these kind of problems. Dealing with an old crush while discovering a new one, dealing with town wackos, and dealing with the demons coming out of the local sewers. What's a girl to do?

Which Way to the Manor? by M. L. Steger


Picture this: Two crazy, rich British citizens going after vampires in the dead of night; a highwayman offering to pay for damages for a car he shot up; a producer who announces his playwright’s arrest over the BBC to bring in more ticket sales; and an American feminist who fights for female camel rights in the Sahara. That’s who you will discover in Which Way to the Manor?

The story is about a man who falls in love with a woman who is terrorized by someone or something. "No writers were harmed in the production of this book... But perhaps they should have been".

"A hilarious book of British Humor that had me chuckling at some parts and laughing out loud at others. I do not believe anyone in a bad mood could stay that way while reading this one! Wonderful!"- Detra Fitch
Posted by Holly Hook at 8:00 PM