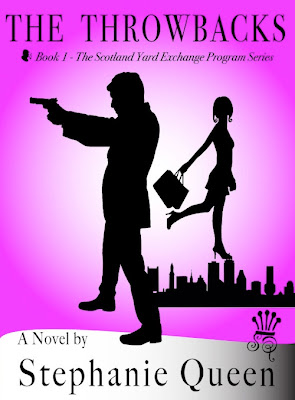 The Throwbacks by Stephanie Queen


She’s a vivacious, light-hearted young beauty from Beacon Hill
He’s a world-weary not-so-young exile from Scotland Yard.
She’s an orphaned decorator who longs for a family of her own.
He’s a rogue detective with a superhero complex.
She’s smitten with this superhero who is the last man she sees in the picket-fence picture of her future.
He’s smitten with this fluffy young romantic who he sees as kryptonite to his career and well being.
But if you saw Grace and David in a room full of people, and you had to pick one man and one woman who belonged together, you would pick them. They would be The Throwbacks.

Vivacious young decorator Grace Rogers sets her sights for that picket-fence life she longs for with the unlikely world-weary British exile, the not-so-young David Young. The ex-Scotland Yard detective joins the Boston Police Department to salvage his career. He hires Grace to decorate his Beacon Hill townhouse to salvage his life.
But this rogue detective’s plans for a new beginning are threatened when he can’t resist the seemingly unseemly romance with his too-young bombshell decorator. Grace turns out to be a key witness in his high-stakes kidnapping case--and like Kryptonite to his career and his well-being with her romantic notions of family life.

"This was a fun, romantic book from the first page... The chemistry between David and Grace was wonderful...She was such a sweetheart I was rooting for her from the beginning. I recommend this book, but be prepared to let other things slide until you reach the end." by avirginiareader
Posted by Holly Hook at 8:00 PM