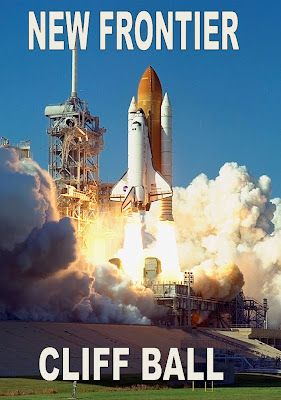 
In this speculative fiction novel, what-if Ronald Reagan became President in 1976 instead and the Space Race turned out differently? He continues with the moon landings, and declares that a moon base would be established by 1979, followed by a Mars Base by 1989. The Soviets decide to up the ante by building an interstellar starship, and send it on its way as the US establishes a permanent presence on the Moon. The US builds a space station, followed by a base on Mars, that will eventually be turned into a colony.

The rest of Earth follows the original timeline, so terrorism rears its ugly head, which will forever change American politics. Iran and its attempt at taking hostages is taken care of in 1979, but a new threat emerges because of it. The new POTUS has to pursue these enemies of the US to secure America's future. We follow America's progress from Moon to Mars, along with the Teacher in Space Program, to an eventual starship mission out of the solar system, which will continue in book two.

"I found this novel interesting, and I enjoy reading this author's novels. The prologue hooked me, which I've learned will be put into greater detail in the second book when it comes out. I found it interesting how the author weaved the alternate history: from Reagan becoming President, which affects what we do with NASA and the Space Race to the Iran Hostage Affair to having bases on the Moon and Mars. The Soviets try to out-do the Americans, and apparently the Americans will right the problem in the second novel. I recommend this to anyone who enjoys American history, alternate history, a little bit of sci-fi (not hard SF btw), and a little bit of political thriller (which is not in your face & button pushing like The Usurper is)."--Amazon Reviewer
Posted by Holly Hook at 8:00 PM