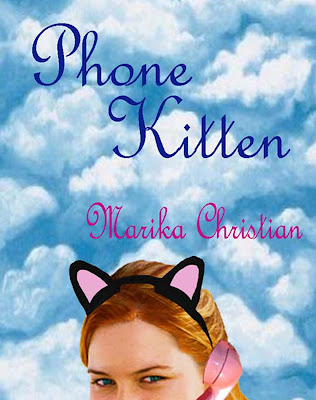 Shy, slightly overweight Emily would die if she had to talk dirty face-to-face—especially to her hot cop boy friend. She sure didn’t set out to do phone sex—she wanted to be a writer. But when her BFF framed her for plagiarism, she got in a tiny financial hole and saw this ad for “phone actresses”… Hey, it’s not nearly as bad as it sounds. No pantyhose or pantsuits, no regular hours, you’re your own boss, and lots of people to talk to. Guys, that is.

But here’s the odd thing—lots of them want to talk about more than Emily’s imagined attributes; they start to think of her as the best friend they’ll never have to meet. Next thing you know, one of her customers gets killed and Emily knows a lot more about it than she should. But she can’t tell the nearest cop, who’s also her own true love, because then he’ll find out about her secret life. What’s a phone kitten to do? Solve the murder herself, of course—because wouldn’t it be a great story for the newspaper that wrongly fired her?

“Christian hits it out of the ballpark with this hysterical, quirky, and endearing story … Phone Kitten is laugh out loud funny from page one. I was immediately captured by Emily and her innocence, and had to laugh at most of the phone sex scenes.” -ChickLitPlus

“When I first heard of this book I was intrigued; a phone-sex worker turned sleuth? Sounds like the perfect mix ... Marika is an excellent writer and I simply loved Emily ... A fabulous book.” -Trashionista

“Marika Christian's debut novel was one of the most fun reads I have had this year. Sweet Emily taking a job as a "phone actress" has to be one of the funniest things ever. And after chatting with Marika and knowing these phone calls were real, amused me all the more.” -Just Jump
Posted by Holly Hook at 8:00 PM