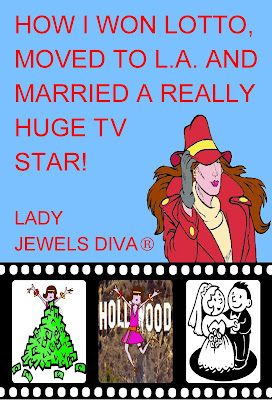 Have you ever dreamed of winning lotto? Dreaming about all the things you will do with those amazing, wonderful millions.

Tahlia Cameron does. Every day! Poring over her gratitude folder full of the things she wants to buy,and do,and have.It possesses all of her waking thoughts.So does a certain suave TV actor. And so her comedic adventures begin after her life altering lotto win.

Which TV star is she referring to? Michael Anthony! Star of the sexily suave TV naval drama she watches every week. Tahlia is convinced she will win millions in lotto, and when she does, she will move to L.A. and marry him. Then comes the day she receives a call. The call. The call that's about to change her life. For the rest of her life.

She has won lotto. The woman from the lottery commission said so, and Tahlia's journey starts. Having the money to do herself up and make herself presentable for meeting the man that she loves. The man she desires. The man she will have! She is determined. But she wants other things in life too, things that stir her passions besides Michael. If that's even possible?

She moves to L.A., sets up a fashion and jewellery business, buys the factory to make the clothes and designs the jewellery herself. She also has serious run-ins with seriously bitchy celebs, one being the bitch (not the bane) of her existence, is stalked by a hot Italian stud from a hot TV crime drama, and saves a big wig TV network C.E.O., then his wife. And it all happens before she meets Michael. Good grief!

When she does meet him, she knows it's love, and is determined to make him hers. She did buy the house next door to him to do so after all. And it happens. But tragedy strikes at a huge network function, where she has to save Michael, and every actor, actress and C.E.O. from the network all while she's bleeding to death!!! And then open her company for business the following week!

Tahlia's life is now way too complicated as she battles her own anguished demons, life altering wounds and seriously depleted karma from the fallout. Everyone's calling her a hero. She sees herself as a killer. And the pain that follows is hell to deal with. But with the love of the man she finally snagged, she knows she can get through anything and gain her good karma back. Especially with Michael and his son by her side. And then she receives a call. Another call. A call that's about to change her life. Again.

"Hello…Tahlia. This is Oprah Winfrey."
Posted by Holly Hook at 8:00 PM