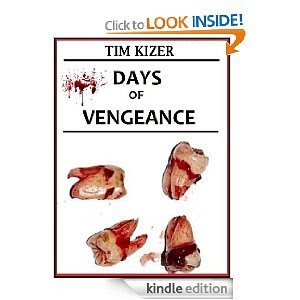 Days of Vengeance by Tim Kizer


With the last six years of his life wiped out of his memory, Frank begins to suspect he may have murdered his wife Kelly, who went missing three days before the car crash that caused his amnesia. While struggling to remember his wife and the events surrounding her disappearance, Frank is shocked to find out that Kelly's family has the same suspicions as he does.

As his memories trickle back to him, Frank is still unable to figure out why he has slaughtered his wife. Things take a darker turn when the in-laws give him to understand that they will stop at nothing to make him remember what he has done to their beloved sister.

Frank's search for answers becomes a fight for survival after he rediscovers that his wife's relatives are a clique of serial kidnappers serving a mysterious one-legged man.

However, the question still remains: Why are these people so hell-bent on getting hold of Kelly's dead body?

His options are limited: he either finds his wife--dead or alive--or dies. In his race against time Frank has all the clues to the puzzle, he just has to remember them before itÆs too late.

"I loved this book. A friend recommended it to me and I read it in one day since the story immediately sucked me in and I couldn't wait to find out what happens next. The novel is well written, has plenty of twists and keeps a fast pace. There are a lot of exciting moments in "Days of Vengeance" that grab your attention.
The book focuses on a thirty-something man named Frank, whose wife went missing under suspicious circumstances. Unfortunately, Frank lost his memory a few days after his wife's disappearance and now is unsure whether he murdered her. A few shocking twists await the reader in the very beginning of the novel. For example, we find out that Frank's wife's relatives are psychopathic killers. But I must say that this is not a book about serial killers; this novel is much more complex and intricate than that. There are many more secrets ahead, each more stunning than the previous one. The ending of the novel left me absolutely speechless.

In conclusion, I would like to say that I enjoyed "Days of Vengeance" a lot and am glad I bought it. It's definitely worth your time."--Amazon Reviewer
Posted by Holly Hook at 8:00 PM