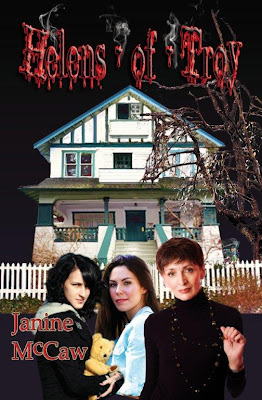 Fifteen year old Goth-chic Ellie has a lot of explaining to do. She’s just moved to the small town of Troy, fought with her uptight mother Helen, met the boy of her dreams and found a dead body on her sexy “new-age” grandmother Helena’s porch. All on the first night!

But Ellie’s not alone. Helen is hiding something. Helen knows all about the kind of eerie dreams her daughter is having — the dreams that show the whereabouts of the missing children of Troy — because she’s had them herself. But she’ll never admit it. Not while Ellie’s sex-crazed friend Ryan is safely behind bars for the murders. Helen knows what it’s like to be attracted to dangerous men.

Then there’s the little matter between Helena and Gaspar Bonvillaine, the teenaged vampire who is learning to feed on young prey. Now that he’s caught Ellie, he doesn’t know whether he wants to kill her or turn her to the dark side and keep her forever. Helena should have finished him off when she had the chance.

To survive the vampire feeding frenzy surrounding them, mom Helen needs to come to terms with her own insecurities and deal with the gifts she has. Helena must learn to ground herself for the good of mankind and more importantly her own family. And Ellie has the toughest choice of all. Ellie must decide whether its time to let her own childhood go and become the woman she is destined to be, one of the ageless and timeless “Helens of Troy”.

"Janine McCaw's newest novel, Helens-of-Troy, is populated by a wonderfully alive group of characters that you meet and come to care about within the first two pages. You'll meet a mother, her daughter and teen age granddaughter, all with the name Helen ( And, coincidentally, they live in a town called Troy.) I won't give away details of the plot, but the action is non-stop. The three women deal with their all-to-human inter-family struggles; and their story is beautifully interwoven with a much more esoteric one. You'll experience the angst of teenage relationships, meet some lost children and some very bad vampires. McCaw gives us witty, clever dialog on nearly every page and some good laughs when you least expect them. The many clues you're given throughout the book come together in a fast and furious climax.
I highly recommend The Helens to anyone who enjoys vampire sagas, the paranormal, or just a good story."--Amazon Reviewer
Posted by Holly Hook at 8:00 PM