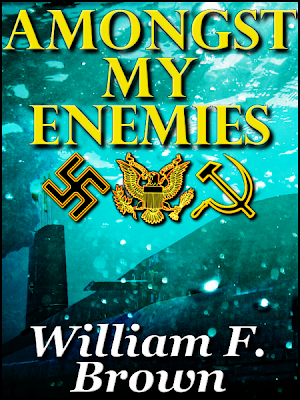 Amongst My Enemies by William F. Brown

Inside an old German U-Boat rusting on the bottom of the Baltic are millions in gold bars, stolen art and jewels, and a secret that could tear NATO apart. The only one who knows the truth is Mike Randall, a battle-scarred American who survived four months in the frozen Hell of northern Germany at the end of the war. When he does speak up, he puts a target on his own forehead, one which the Russians, the West Germans, the U-boat’s former owners, the Israeli Mossad, and even his own government quickly take aim at. Some want the gold, some want him dead, and some want proof about a high-ranking spy inside NATO itself. Randall’s wants are much simpler. Caught between the Kremlin and a new, deadly, 4th Reich, he wants revenge and to satisfy some old debts with a steel-jacketed bullet.

“Great Cold War Thriller! This was a very suspenseful, edge-of-your seat thriller about the closing days of World War II. The story was exciting and engaging and really reminded me of some of the books written by Alistair MacLean that I read years ago. There was also a strong Tom Clancy feel in the machinations of the various spies (but without Clancy's techno-jargon). If you are looking for a Cold War thriller, this one was very engaging."--Kathy Martin

“A Must Read for Historical Fiction and Suspense Fans! I really enjoyed this story of Mike Randall and the U-Boat from Nazi Germany. The story had a very realistic feel to it. It made me want to go out and research some of the people listed in it . . . The descriptions of the Nazi SS guys had me cringing . . . Overall, this would be a great pick for history and suspense buffs. It felt real, like the author stole the idea from a headline news story!"--The Alaska Bookie

“Redemption in the Good, Bad and Ugly Remnants of WWII! No, this is not just another war story! William Brown takes the reader to the heights and dregs of the human condition, giving glimpses to the motives and relationships that are ruled by head and heart. This is a story that speeds along like a Ken Follett or Eric Ludlum novel of old. For those who love adventure, thrills, and mystery with a tinge of romance, this novel will leave you breathless and wanting more from this skillful writer. Splendidly written!"--Crystal Book Reviews
Posted by Holly Hook at 8:00 PM