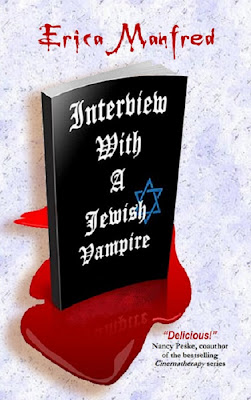 Interview with a Jewish Vampire by Erica Manfred

Blurb: The last thing zaftig middle-aged journalist, Rhoda Ginsburg, expected when she signed up for JDate was to fall in love with a vampire. But when she meets drop-dead gorgeous Sheldon, a Hasidic vampire, she falls hard. She rationalizes that he may not be alive, but at least he’s Jewish.

She learns that back in the nineteenth century Sheldon was a rabbi who was turned into a vampire by Count Dracula, an anti-Semite who got his kicks from turning Orthodox Jews into vampires because then they’d have to drink blood, which isn’t kosher.

Soon after she meets Sheldon, she discovers her beloved mother, Fanny, is terminally ill, so she comes up with the crackpot idea of getting Sheldon to turn Fanny and her friends, known as “the goils,” into vampires. Once she becomes a vampire, Fanny tires of her boring life in Century Village, Florida, and, seeking thrills, she goes clubbing and disappears into the nightlife of South Beach in Miami. When Fanny and her goil posse “go rogue” and start preying on the young, Rhoda and Sheldon must track them down to keep them from killing again.

Interview with a Jewish Vampire turns vampire lore on its head, proving that not all vampires are young and beautiful and it IS possible to be undead and kosher.

Erica Manfred's wry humor is the perfect match for the sexy-vampire genre in this novel about the emotional intricacies of dating a hot Jewish guy who is a card-carrying member of the undead. Delicious!"--Nancy Peske, coauthor of the bestselling Cinematherapy series, Meditations for Men Who Do Next to Nothing (And Would Like to Do Even Less) and How to Satisfy a Woman Every Time on $5 a Day.

"Bloodaholics! Only Erica could think of this! And PETA! Clever, clever, -clever."--Avigayil Lansmann, Torah scholar, artist, author and contributor to The Meta Arts Magazine.