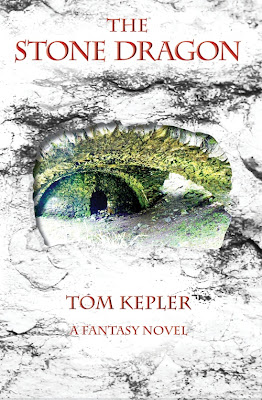 The Stone Dragon by Tom Kepler

Dream magic is the most dangerous of magics because it is so difficult to control. Apprentice mage Glimmer—Not a Glimmer of Magic—realizes this when he discovers that his apparent lack of magical talent is because his magic manifests only when he is dreaming. His first attempt at dream magery conjures a dragon, and just before dying in dragonfire, Glimmer, in desperation, locks the dragon within the stones of his master’s house. How, though, do you live in a house that is also a dragon? And how can you even sleep—knowing that dream might slip to nightmare?


"The author makes the point that magic is everywhere, in us, and around us, and at the core of everything . . . The dragons, of course, steal the show." --Pauline Ross, Goodreads review


". . . evocative images of a place that 'might have been, long ago and far away' where friendly gnomes and magic are real. But don't be fooled. This is no child's tale. It will challenge the reader to think about the power of thought and attitude and their effect on the place we forge for ourselves in our world." --Yvonne Hertzberger, Amazon review

The Stone Dragon is a fantasy book revolving around the protagonist, Glimmer. At first glance, it may seem like the average fantasy novel, solely about dragons: the fire-breathing monsters who live in caves of solitude and horde massive amounts of treasure. The dragons in this book are much more complex. They are more like divine beings than just physical creatures. Like primal forces of the Universe would be the best way for me to describe them. The elements of fantasy that do show up in The Stone Dragon are refreshingly original in the way they are told and crafted in the story. Gnomes, dragons, and magic would be my prime examples of individuality. --Sebastien Lacasse, Amazon review.
Posted by Holly Hook at 8:00 PM