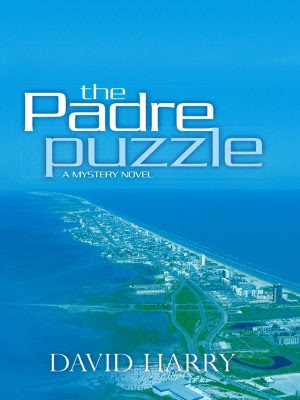 The Padre Puzzle by David Harry

When the body of a Texas Ranger working undercover in Mexico as a member of a drug cartel is found dead on the beach, Jimmy Redstone, an injured Ranger spending time on South Padre to rehab his shoulder, is pressured into unofficially investigating.

The local Coast Guard Chief, and son of Redstone's former partner, lands in the hospital in a coma after trying to give Redstone information he uncovered pertaining to the murder, leading Redstone to suspect that more is going on than simple drug smuggling. Angella Martinez, an attractive rookie, draws the assignment of staying close to Redstone.

Between fighting his unprofessional feelings for Martinez, keeping the rookie cop out of trouble and continuing their investigation, Jimmy’s plate is pretty full. As they continue to probe, it becomes clear that activities far more dangerous than drugs are involved, activities that could undermine the very essence of American life if Jimmy and Angella can’t stop them in time.

"The Padre Puzzle was an awesome read. Gripping from page / screen 1!"

"I do not hand out five stars very often but felt David Harry's "The Padre Puzzle" deserved it. I could not put the book down. Great mystery!!! I am definitly buying the next book in the series,"The Padre Predator."

"I would highly recommend this book for an entertaining read!"
Posted by Holly Hook at 8:00 PM