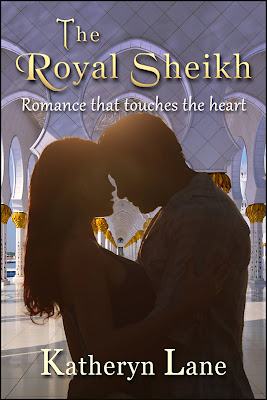 The Royal Sheikh by Katheryn Lane

Clare McKay is a dedicated architect with no time for womanising men. That is, until she accidentally meets Sheikh Rafiq Al Kahil, an Arabian prince, known in the international press as the Playboy Prince. Clare is intent on not falling for his seductive charm, but when he asks her to design a mansion, he presents her with an offer that she can’t refuse. Once she finds herself alone with him in the Arabian desert, how long will she be able to hold out against his advances? And will he be able to cast aside his womanising past for her, as well as a secret engagement to an Arabian Princess?

"The Royal Sheikh is a page turner that I read in one evening. I love romance and this book will warm your heart. Clare is an architect in training and meets Rafiq one evening while out with her friend, Louise. Rafiq and Clare meet in the most unromantic way, although he quickly becomes entranced by her. They are both intrigued by each other and secretly hope to see each other again.

When they run into each other again, Rafiq asks her to come up with designs for his new house. As they spend more time together, they slowly fall for one another. Through misinformation, misunderstanding and disagreements, they encounter a few bumps in their relationship. Rafiq and Clare must learn to communicate to make their love work.

Every girl wants to be loved, spoiled (just a bit) and wanted. Rafiq certainly fits the mold as a great guy. He treats Clare with love and affection and he genuinely cares about her. When Clare discovers his secret, she reacts as I would have if I were in her shoes. She wants to put distance between and Rafiq and try to move on and start over.

The Royal Sheikh will keep you on edge wanting to get to the end. What will Clare do? What will Rafiq say? How will they overcome this? You will cry, your heart will melt, and you will want to root for Rafiq and Clare. Grab your tissues and some tea and settle in for this romance roller coaster!" - Beauty Brite, 5 Stars on Amazon
Posted by Holly Hook at 8:00 PM