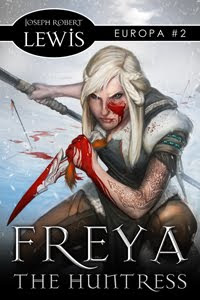 Freya the Huntress by Joseph Lewis

This is Book Two in the Europa series, the direct sequel to the novella OMAR THE IMMORTAL. The Europa series is a dark fantasy set in the same world as the Halcyon Trilogy of swashbuckling steampunk adventures.

Last night, Freya's sister was bitten by a horrific beast in the snowy hills of Ysland. Now, Freya has only a few hours to find a cure for this strange plague before her sister becomes a ravening fox demon.

With her husband Erik and the young witch Wren at her side, Freya discovers that the blood-thirsty monsters have already ravaged her homeland as she explores deserted cities full of ghosts and meets a few lonely survivors on the edge of madness. She finally seeks answers in the ancient city of Rekavik where she must face the deadly witch queen Skadi and the vicious warrior Leif Blackmane.

But the only person who can cure the demon plague is the same person who created it, a stranger from a distant land who carried a sword full of captured souls, a man who was murdered five years ago... But not even death will stop Freya from saving the people she loves.

"I've been waiting for Europa #2 for awhile. Having Omar stuck on Ysland I couldn't wait to find out more about the sun steel. Mr. Lewis has definitely created a mythology with this metal and you can't help but want to know more about it. What's even better, the stories are not about the sun steel but you get tidbits of it throughout this and all the Other Earth books.

I really enjoy the effort Mr. Lewis has put in to even using small language elements to immerse yourself in the environment more. The way the characters speak feel different on Ysland as opposed to the mainland. Given that the first book, Omar, were all characters from the mainland, this is the first time that the difference becomes apparent.

Love the new characters. Freya is now the second best bad-ass heroine next to Asha. Can't wait for the third book. We get a mythological werefox and based on the teaser for Book 3 something that sounds like frozen zombies."--Amazon Reviewer
Posted by Holly Hook at 8:00 PM