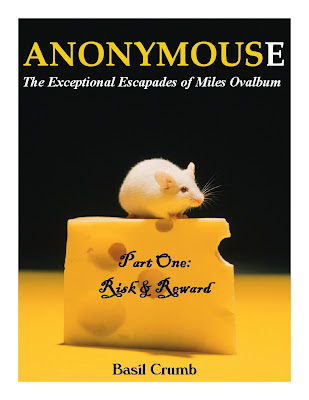 Anonymouse: The Exceptional Escapades of Miles Ovalbumm by Basil Crumb

And an unlikely hero with a lifelong fear of cheese.

Anonymouse: The Exceptional Escapades of Miles Ovalbum is the unforgettable, two-part tale of an intrepid mouse who risks his life to repay a gallant act from the past.

Anonymouse follows Miles on a perilous adventure packed with action, humor and intrigue. Through alternating chapters and overlapping events, the lives of the valiant hero, his friends and associates along with a British couple and their cats intertwine in a series of events triggered by an anonymous letter delivered in the dead of night.

In Part One, Miles writes a letter warning Dwight and Delilah Percival that nefarious forces intend to harm their cats, William and Shakespeare. He hopes the note will spur the Percivals to return to London and avoid a deadly catastrophe. Instead, it initiates a series of increasingly daunting challenges for Miles as well as a puzzling mystery for Dwight and Delilah.

In Part Two, Miles risks everything—his fiancé, his freedom and his future—to stop the murderous plot against William and Shakespeare. As Miles works to save the two cats, Dwight and Delilah enlist the aid of a noted paranormal expert, a local historian and the village constable to unravel the truth behind the mysterious letter.

"I seriously could not put this book down. My wife complained about the Kindle light keeping her awake, but I didn't care. It is a great story for children and adults. The characters are well drawn. The reader understands the fear and honor that Miles Ovalbum (gotta love that name!) displays as he is bound to protect the lives of two cats William and Shakespeare. The story straddles both the human world and Rodentia, a city where rodents of all types live. The chapters link well to each other (England to Rodentia and back again). The wordplay was fabulous. I don't wish to spoil it for you, but a talent agent named Fontina Brie is just too good of a name. I cannot wait to read the sequel. I don't care if my wife complains (don't tell her I said that!)"--Amazon Reviewer
Posted by Holly Hook at 8:00 PM