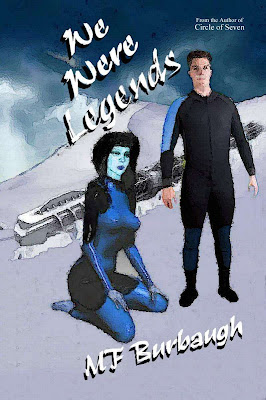 We Were Legends by M. F. Burbaugh

Jake is a NASA pioneer pilot in a newly developed one-man explorer ship who takes to the stars to escape torment. Odds of survival are less than four in ten, and it is believed NASA pads the statistics.

He is forced to crash on an unknown planet that is dying, as its star gets colder in defiance of the laws of physics. Jake begins his survival quest with a few technological items from his ship and a still-functioning computer. It gets more complex when he rescues a beautiful girl and struggles to overcome the life and death challenges of the planet's inhabitants, mega-fauna, and extreme climate. He discovers a few of Earth's ancient stories of gods and demi-gods that are embroiled in hate, vanity, and what some call magic, are more than myths.

With success or failure, Jake proves that legends are made, not born.

"I had the privilege to read this before release, and I can honestly say it is a truly amazing story. We Were Legends deserves this accolade because it is fresh, exciting, hilarious and tearful, and yet it draws from the classics of the past. I heartily recommend it to any speculative fiction reader."--Amazon Reviewer
Posted by Holly Hook at 8:00 PM