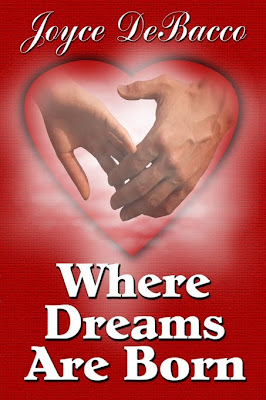 Where Dreams Are Born by Joyce DeBacco

It was supposed to be a win-win situation—a safe environment in which to raise a son for single mom Vicky, housekeeping and childcare for widowed Jack. Neither one wants or expects anything more. Then Jack learns his best friend fathered Vicky’s son and now wants partial custody, and he feels threatened. He’s come to care deeply for both, and doesn’t want to lose the family they’ve become. In desperation he offers a radical solution—marriage. Vicky knows she can do worse than marry Jack, but wonders how successful their marriage would be when its only reason for being was to keep from losing her son. Add to this a troubled child with a secret about her dead mother and a vindictive ex bent on revenge and complications abound.

“Joyce DeBacco does a really good job of getting the reader invested in the outcome of this unusual pairing. Enjoy.” S. Wurman of Night Owl Reviews.

“This is truly a compelling novel of real life and will stay with me a long time”. Judith of The Book Binge.

“Joyce DeBacco pens one of those tales that is warm and loving while still mixed with trials that will touch a reader's heart.” Dee Dailey of The Romance Studio
Posted by Holly Hook at 8:00 PM