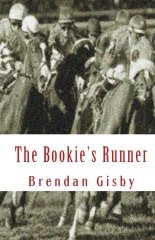 The Bookie's Runner by Brendan Gisby

Bob Dylan wrote the classic song Knockin' on Heaven's Door and thereby unforgettably marked the passing of an otherwise insignificant character in the movie Pat Garrett & Billy the Kid.

Brendan Gisby has written this utterly beautiful novella to honour the short life of his father, a man of seemingly as little significance.

The story is narrated with haunting subtlety, rhythm and depth of feeling by his teenage son as he takes a bus ride back to school for the first day of a new term where he will have to announce his father's sudden death and deal with the resultant reactions without bursting into tears.

He also has to come to terms with the fact that, on reflection, there is a huge amount he doesn't know about his father and that all he is really left with are snippets of personal memories.

Make no mistake, The Bookie's Runner is a modern masterpiece and, in writing it, Brendan Gisby has not only honoured his father, he has ennobled him.

"This book is nothing short of gorgeous. It may be one of the most poignant books I have ever read."--Tiffany Harkleroad, reviewer, Tiffany's Bookshelf

"It is too late to read this before Brendan's Dad died and to put things right, and that would somewhat undermine the point of the book, but there is time yet to read it before you do. Yes, it is one of those books for sure."--Tim Roux, author and publisher 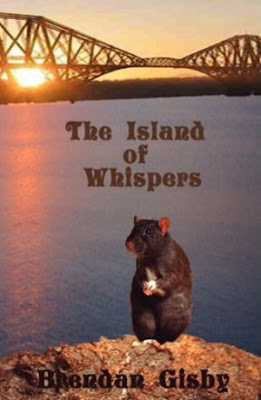 The Island of Whispers by Brendan Gisby

Set on a beautiful islet lying in the shadow of the world-famous Forth Railway Bridge in Scotland, this superbly written tale centres on the creatures who inhabit it – a huge colony of rats who have made their home beneath the crumbling ruins of the monastery. ‘Home’ is hardly the word for the native black creatures, however, who live under the cruel dictatorship of the larger brown rats who took over the colony when they first arrived in their masses from a passing foreign ship.

Of the original black rats, Twisted Foot is a rodent on a mission, and one cannot help but feel compassion for our protagonist as he carries us along with him through his trials and tribulations, until finally deciding to take matters into his own hands and make a bid for freedom.

This is a delightful and cleverly constructed story. With his excellent powers of description, Brendan Gisby has produced an enthralling and utterly fascinating book – and one which is an absolute must for anyone who has ever read and enjoyed Watership Down.

“Brendan Gisby, with his cast of larger-than-life furry characters, sheds imaginative new light on a host of lessons societies everywhere need to be reminded of. The principles, motives and actions of his most powerful rats mirror perfectly many of the human beings who manipulate all the rest of us. An outstanding accomplishment!” ~ Tom Winton, author

“Reminiscent of Richard Adams' Watership Down, Brendan Gisby's novel is a mesmerizing tale of conquest, enslavement and yearning for a life of freedom from oppression and harm.” ~ George Polley, blogger and writer
Posted by Holly Hook at 8:00 PM