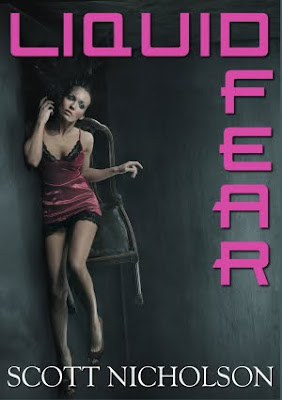 LIQUID FEAR: A Mystery Thriller
When Roland Doyle wakes up with a dead woman in his motel room, the only clue is a mysterious vial of pills bearing the label “Take one every 4 hrs or else.”

Ten years before, six people were involved in a secret pharmaceutical trial that left one of them dead and five unable to remember what happened. Now the experiment is continuing, as Dr. Sebastian Briggs concludes his research into fear response and post-traumatic stress disorder. He’s backed by a major drug company and an ambitious U.S. Senator, but he also has a personal stake in the outcome.

Only by taking the mysterious pills can the survivors stave off the creeping phobias, sexual impulses, and inflicted madness that threaten to consume them. But the pills have an unexpected side effect—the survivors start remembering the terrible acts they perpetrated a decade ago. They are lured back to the Monkey House, the remote facility where the original trials took place, and Briggs has prepared it for their return.

Now they are trapped, they each have only one pill left, and cracks are forming in their civilized veneer.

After the pills are gone, there’s only one option. “Or else.”

"Keep both hands on your pants, because Nicholson is about to scare them off."--J.A. Konrath

"Scott Nicholson is on his way to the front rank of genre writers, but don't be surprised if he--like Koontz and King before him--becomes a genre unto himself."--Page Horrific
Posted by Holly Hook at 8:00 PM