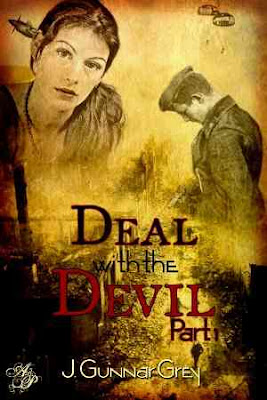 Deal with the Devil, part one, by J. Gunnar Grey

Wehrmacht Major Faust has a dangerous secret: he likes England. But it’s May 1940 and his Panzers are blasting the British Army off Dunkirk’s beach, so he keeps his mouth shut even though it hurts. When the Waffen SS try to murder their English prisoners of war, Faust helps the POWs escape. Now it’s treason, with his neck on the line.

Then a friend gets him drunk, straps him into a parachute, and throws him out over Oxford during a bombing run. He’s quickly caught. Because he helped type the battle plan for the invasion of England, Faust cannot allow himself to be broken in interrogation. Two German armies depend on it. But every time he escapes, someone rapes and murders a woman and the English are looking for someone to hang. He’s risking disaster if he stays, someone else’s life if he runs, and execution by the Gestapo if he makes it home.

Major Stoner, professor turned British intelligence officer, sees three possibilities. Faust perhaps was joyriding in that bomber, as he claims. Or he’s on a reconnaissance mission for the German invasion. Or he’s a spy. Stoner must break Faust to learn the truth, no matter how it strains his old heart. He must save England, and his granddaughter.

Their battlefield is confined to a desktop. Only one of them can win. Someone must break. Someone must make a Deal with the Devil.

"I've just finished reading Part One of Deal With the Devil, and I'm counting the days until Part Two is available on Amazon. This story is a winner!
I usually read women's fiction, so a book dealing with World War II, set in 1940s England, and with a male protagonist is a big departure for me. But Grey's skillful writing grabbed me from Page 1 and held me throughout the book's pages. Protagonist Major Faust is one of the most intriguing characters I've encountered in a long time. I like him, but I'm not completely sure I can trust him. The minor characters are interesting as well, and their personalities are revealed through their interactions with Faust. Each character stands alone, distinct from the others, yet they all mesh together to create a plot that kept me reading later than I should have on more than one evening.

I whole-heartedly recommend this book to lovers of World War II history, readers of mysteries, and fans of all-around good stories. Deal With the Devil, Part Two, is at the top of my TBR list!"--Amazon Reviewer
Posted by Holly Hook at 8:00 PM