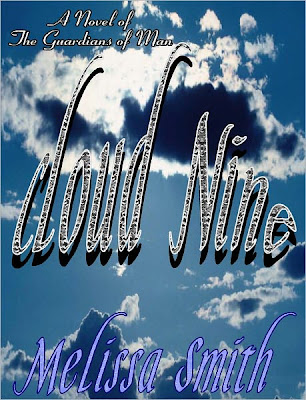 Cloud Nine : A Paranormal Romance of the Guardians of Man by Melissa Smith

What happens when you receive a guardian angel?
What if you don't believe you need one?
What if one wants you removed?

Claire Grayson is a seventeen year old on the verge of graduating high school. Her mother, now working full time, isn’t home much, her father, an attorney, has always been gone long hours. So now she has learned to take care of her basic needs on her own. Things like taking on tutoring jobs or babysitting for spending money.

Her best friends were the bright spots that helped to keep her laughing when she thought herself in love only to have her heart broken. After the crash of her heart, it took a while for her to realize that she could and would move on. Just when she did, when she was finally done waiting for him to realize his mistake. When she decided that it was time for her to take a step forward. She meets Sterling Warde.

Sterling Warde is a Guardian. Someone who goes to people in need and helps them get on in life with a better understanding of living. While with a charge that was ready to take back his own life, Sterling catches a glimpse of Claire and is startled by his strong reaction to her. Puzzled, he follows her. Something about her touched his nerves and stole his breath. When he finally reveals himself to her she is afraid of him and doesn't want him around. But with time and patience, he will work to see her safe.

There are people out there that want each of them for themselves. Someone who will stop at nothing to have Sterling. Someone who will do anything to claim Claire's affections. Together, Sterling and Claire will dissuade them.

Some will fall. Some will hurt. And some will...

"Cloud Nine deals with the growing relationship between a teenaged girl and her self-appointed spirit guardian, and the many situations she faces as she tries to synch him up into her typical teenager life. These implicit complications include her friends, family and a former boyfriend. Definetively a fine romance to read.
The author seems to possess a keen knowledge of the teen mind, which makes her able to create credible teenagers, quite a difficult deed. Earlier on, the writer manages to pull one of the most dangerous stunts in the English language: switching from one character viewpoint to another while still mantaining the first person narrative... and she succeeds. Usually this is certain literary suicide; some readers will find find these non-standard handling of conventions jarring and confusing. But the author apparently thinks 'Damn the torpedoes' and goes full speed ahead, spinning a very charming tale with a lot of bravado. Highly recommended."--Amazon Reviewer
Posted by Holly Hook at 8:00 PM