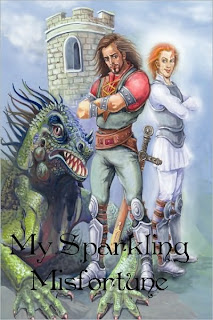 My Sparkling Misfortune by Laura Lond, illustrated by Alla Alekseyeva


Lord Arkus of Blackriver Castle readily admits that he is a villain and sees no reason why it should stop him from being the protagonist of this book. After all, Prince Kellemar, an aspiring hero, has defeated him in a rather questionable way. Bent on revenge, Arkus attempts to capture a powerful evil spirit who would make him nearly invincible, but a last-minute mistake leaves him with a sparkling instead - a "goody-goody spirit that helps heroes, watches over little children, and messes up villains plans." Bound to Lord Arkus for five years of service and sworn to act in his best interests, the sparkling is not easy to get rid of, and of course his understanding of best interests is quite different from what Lord Arkus has in mind.

"Fantasy fans of all ages will find something to enjoy in My Sparkling Romance, whether it's the imagery, the humour, or the experience of reading a chapter to their kids at bedtime."--The Literary Lionness

"Lord Arkus of Blackriver Castle is a deliciously evil villain. In fact, "evil" is one of his favorite words. And when Prince Kellemar of Dalvanna calls him "despicably wicked," Arkus considers it flattery. What a nasty, dreadful, and cruel villain Arkus is. Oh, and don't forget funny. Yes, I said funny! With author Laura Lond's crisp, wry sense of humor, you'll be laughing right along with the scoundrel on almost every page."--Feathered Quill Book Reviews 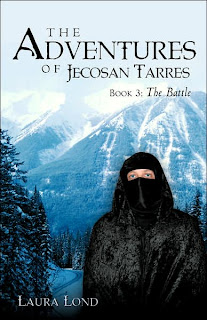 
Having done his best to fulfill the commission given him by a supernatural messenger, yet apparently having failed to do so, Jeco and his friends, Dalian and Lord Farizel, find themselves running for their lives from the wrath of King Alvard III. When the king pays dearly for his mistake, the nine-year-old Princess Arvelina is elevated to a position she could not have anticipated. While the Meorian army marches toward Tirgan to destroy the Book of Light as originally planned by Alvard, it seems all hope is lost to stop a war between the two nations as the Tirganians have begun moving their troops in response. Disobedience, although done out of best intentions, throws the conflict into an event of extortion of life and death, leaving the Tirganian king, Ez-Keramon, to decide the fate of a dearly beloved young man. Without intervention by the Lord of the heavens the two nations face the judgment of a blood bath. Individual character qualities and actions bring to each their own penalties and rewards, as well as the effect they have on others.

The writing is smooth and the conflict is there right from the first page. The characters are strong and the sample promises a good read. I was intrigued by the black horseman and why he wears his mask, and I'm sure readers will be as well.
Posted by Holly Hook at 8:00 PM