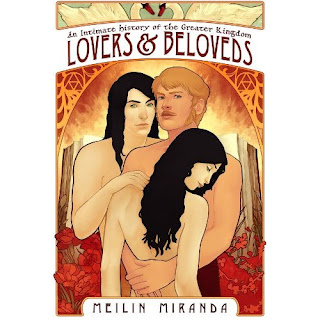 Lovers and Beloveds: An Intimate History of the Greater Kingdom Book One by MeiLin Miranda

The Tremont family has conquered kingdom after kingdom, and rules its continent. Now, Tremont stands on the cusp of an industrial revolution; trains and steam engines are new, and the Scholar Priests of Eddin's Temple make exciting discoveries daily. Magic is long forgotten, but the Gods are not. Prince Temmin must now leave his childhood home to live with his father--Harsin the Fourth, by the Grace of Pagg, King of the Greater Kingdom of Tremont and Litta, Emperor of Inchar. Harsin expects his son to become the kind of ruthless, pragmatic man he is. But his immortal advisor Teacher has other plans, involving the seductive human avatars of the Gods called the Lovers. Teacher intends to bind Temmin to the Lovers' Temple, bring him closer to his people, and set him on a path that will lead to ultimate glory for Tremont--or its end. This book contains some adult content.

"[O]ffers an impressive depth and breadth in terms of world-building, mixing hints of Victorian aristocracy with Ancient Greek religion to create a compelling, evocative setting." --A.M. Harte, "Quills and Zebras"

"More than satisfied. It was excellent"--M.C.A. Hogarth 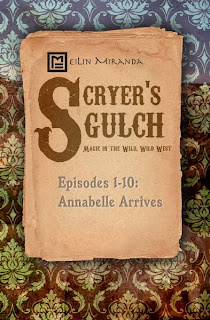 Treasury Agent Annabelle Duniway is on the trail of a brilliant, twisted spellcaster in a 19th century mining town full of demons, ghosts and werecritters. In Episodes 1-10, Annabelle and her demon cat Misi arrive undercover in scruffy Scryer's Gulch and immediately come under the watchful eye of handsome sheriff John Runnels. Ranked four in Smashwords' most downloaded scifi/fantasy books! Rated PG-13 for some adult concepts. 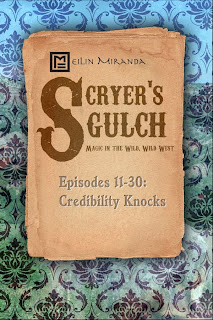 
Treasury Agent Annabelle Duniway is on the trail of a brilliant, twisted spellcaster in a 19th century mining town full of demons, ghosts and werecritters. In Episodes 11-30, Annabelle gets closer to Sheriff John, Misi gets closer to fellow demon Mamzelle, Chinese poetry is declaimed, magic guns are drawn, and John's brother Rabbit has a bad night. Three in a row, in fact. Rated PG-13 for some adult concepts.
Posted by Holly Hook at 8:00 PM