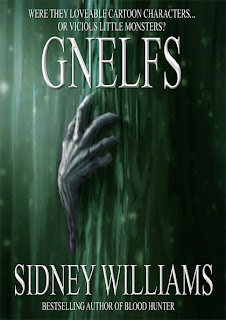 
Cries in the night from her daughter Heaven are just the beginning for Gabrielle Harris.

What seem to be nightmares about Heaven's favorite cartoon characters soon lead Gab to a stranger paranormal conspiracy focused on revenge. She's faced with a living nightmare in which friends die and dangerous sorcery is at work.

With only the help of a strange holy man named Danube, Gabrielle battles supernatural forces for her daughter's life and soul and for her own sanity, especially when she learns she has to face not cartoon characters but demonic forces and hell itself.

Nothing short of a trip into the depths of Hades will end the terror.

"The story never really lets up, it doesn't give you a breather. Instead, once it has it's wicked hooks in you, it keeps dragging you along. The book is impossible to put down, you want to know what's coming next."--Amazon Reviewer
Posted by Holly Hook at 8:00 PM