Bargain eBooks #20: The Fall of the Altairan Empire Book 1 by Jaleta Clegg 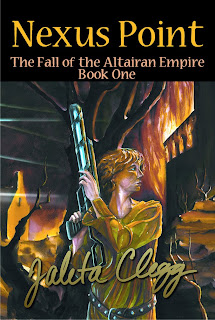 The Fall of the Altairan Empire Book 1 by Jaleta Clegg

Smashwords.com (for Sony, Nook, Kindle, PC, and all other eReaders)


Stranded on a primitive world, facing death at the hands of the natives, betrayed by her crew, hunted by drug smugglers, Captain Dace has one hope of rescue - convince the Patrol agent trying to kill her that she's innocent.

"'Nexus Point' from Jaleta Clegg is an inventive romp, worthy of many follow up tales; all on the strength of the marvelous Capt. Dace. In my youth, I would carry a lingering crush on such a character - hoping someday to see her in person.

Dace is not an accidental success: she is an accident - waiting to happen! What a joy to follow her as she bumbles and mumbles in this little drama/opera. Ms. Clegg must have howled with glee at her inventive predicaments. The buckles swash! The blasters blast! And the horses run away in fright, until you whistle for them. Dace would have been the constant captive when we played cowboys and indians as children.

There is much in this story to love unashamedly. There are many familiar elements in the plot, beautifully realized. There are broad strokes of mayhem, the conclusion sizzles. There are enough human moments that you wish you could point out the correct direction to run. Dace needs to know when to hush, at a few predicaments, and you can't help but try and shush her.

In short, 'Nexus Point' is a true gem in the genre of space fantasy. Yes, Dace is in space, for just a bit, and yes....she messes that up!

Ms. Clegg has my attention now, and a promise to follow where she is going"--Smashwords Reviewer


"A traditional-styled space opera, Nexus Point takes you on a non-stop adventure. From chapter one when Captain Dace is forced to make an emergency landing and lose her ship until the end, the suprises kept coming. Dadilan is a planet rich in perils and goings on. Captain Dace stumlbes into them all. Definitely a fun read. If you love space opera, you'll love Nexus Point."--Smashwords Reviewer
Posted by Holly Hook at 8:00 PM