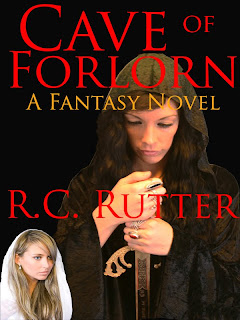 Cave of Forlorn by R.C. Rutter

The King is dying. Demons have slowly taken over and their last task is to
kill the King. For the kingdom to survive, the prophecy must be fulfilled;
the daughter must be summoned. The King is reluctant because his first
daughter was killed by assassins. Hidden away since before her birth, the
King's daughter has no idea of her true identity.

Gweneviere, a local girl, known for her innocence, charm and honesty, is
chosen to find the daughter, give her a locket, and send her to the
castle. She reluctantly embarks upon her journey traveling with a few
trusted companions and protectors. In her innocence, she is hoping to be
home by lunch, after all, it sounds like such an easy task.

Wolves are the essence of legend in the Kingdom. Imagine their surprise
when the first stranger they meet is a young woman, brandishing two swords
and traveling with twelve wolves.

The assassins want to kill Gweneviere, the army wants to capture her, the
Queen wants to hold her for ransom, cave-dwelling Cerberus wants eat her,
and the Encantado (changeling) can't decide what he wants to do.

Then there is the whole matter of the wizard who faked his own death so he
could retire in peace. You know he has to get involved in this somehow.

Gweneviere must succeed or all is lost. Unfortunately, loyalties sometimes
change with the wind.

"Being more of an action novel type of person, I was unsure as to what to expect from the "Cave of Forlorn"... However, after reading this truly moving novel, I have an entirely new perspective on what i am looking for in a good read. The "Cave of Forlorn" is a breathtaking series of events that will keep you guessing as to what is going to happen next. Good Form R.C. Rutter, when is the movie going to debut?"

"Not normally drawn to traditional fantasy, I was pleasantly surprised by "The Cave of Forlorn". Recommended by a friend, I found the story flowed very well and held my attention--so much that I couldn't put it down until I finished! A mysterious locket not only determines an ailing king's fate, but it proves to be the catalyst for a reunion of sisters. Along the way, Gweneviere and Lydia must overcome a myriad of external and internal enemies, where uncertainty regarding their collective birthrights is just as much a menace as wolves that deliver poisonous bites and demon arrows that can cut a man in two."
Posted by Holly Hook at 8:00 PM