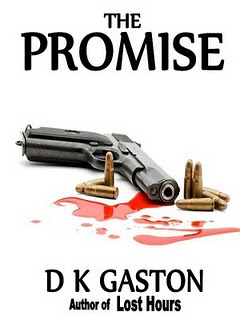 The Promise by D K Gaston


Detroit Police Homicide Detective, Sergeant Roman Stefan, has one of the best arrest records on the force—he’s also a dirty cop. Roman promises his ailing father that he'll clean up his life and go straight. The problem is, Roman likes being dirty. As he deals with his promise, he's assigned to a 4-month old homicide investigation of a prostitute. Compounding his trouble is the dead hooker's sister, Channel 3 News anchor Hallie Warner, who has placed pressure on the mayor’s office to provide answers.

As Roman and Hallie find clues of Ebony Warner’s murder, they soon become targets of ruthless killers who don't want the truth uncovered. In mortal danger and unable to rely on his dirty ways; will Roman Stefan be able to keep the promise he made to his father?

"Sergeant Roman Stefan of Detroit is a dirty cop. Roman promises his ailing father that he will clean up his life. He is assigned to a 4 month old homicide investigation of a prostitute named Ebony Warner that no one seems interested in. News anchor Hallie Warner is the sister of the dead prostitute. Hallie is putting pressure on the mayor's office to provide answers to her sister's death.

As Roman and Hallie work together find clues of her sister Ebony Warner's murder, they soon become targets of killers who don't want the truth to be uncoverered. Roman is trying hard not play dirty and keep his promise to his father. As Roman investigates the murder and get deeper into it, things are just not adding up to Ebony's death. What Roman uncovers is unbelieveable and you will never see it coming.

This story is very well written and has an unbelievable ending. It will catch you off guard. The plot and twists in this story are so well written. This book will keep your interest until the end."--Amazon Reviewer
Posted by Holly Hook at 8:00 PM