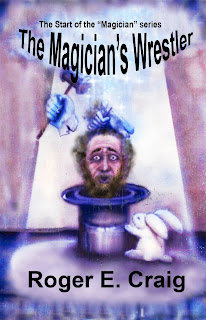 The Magician's Wrestler is the first of the Magician series. It starts with magic and ends in the law courts.

Beautifully crafted with the writing skill of a seasoned trial lawyer, it will keep you entertained to the last page. Fully interactive Table of Contents. The novel brings together a quartet of diverse entertainers who live together as a family.

Eric Hightower is a magician and a lawyer who at one time or another drowns both careers in alcohol. Ellen, his wife, is the "Beautiful Magda" on stage with him. Offstage she is the business manager for the act and Eric's personal Carrie Nation. Insuring Eric's sobriety is her mission statement.

Jack Bellow, a rough house fighter and actor, turns the domestic duet into a trio when he helps Eric and Ellen fend off rowdies who invade the stage at a State Fair.

The three become four when Jack discovers Deanna, a trapeze artist, at Circus-Circus.

When Jack is charged with murdering the man who assaulted Deanna, Eric brings his magic to the courtroom with surprising results.

"An interesting story of diverse entertainers who meet in the book and eventually live together in a big house in Detroit. They travel to Las Vegas and other theater venues to perform; most of the time in a group but sometimes separately. All the characters are interesting people and the author provided enough background information for me to feel that I knew them intimatley. I liked this book because I like to read books in a series.
Eric, a talented stage magician and a trained lawyer, is the kingpin of the group. He does however, go off the rails on drinking binges with either hilarious or disastrous results. The beautiful Magda is the voice of reason, Jack is a fighter who is useful in tough situations and Deanna is the smart trapeze artist. When Jack is accused murder, Eric needs all his magic and courtroom smarts to try to save him from jail.

I was really pleased with it and I look forward to the next book of the series."--Amazon Reviewer
Posted by Holly Hook at 8:00 PM