Bargain eBooks #37: Tales From the Green Book One: The Magic Flute by S.D. Best 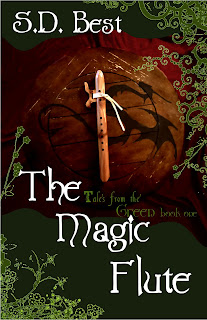 Tales from the Green Book One: The Magic Flute by S.D. Best


For a young boy named Alex Samuels, suburban life is a meaningless waste of time. Wake up, go to school, get kicked off the baseball team, beat the latest videogame, repeat as necessary. As he nears his thirteenth birthday his apathy knows no bounds. Things had been different when he had been a child, though. Back then he had believed in magic.

Fueled by his grandpa's fairy tales of his own supposed adventures in a magical world known as the Green, Alex had once believed he too could be a hero. That is until well-meaning parents had quashed his dreams with a harsh dose of reality. He long ago gave up on believing in stories of dragons and elves and magic swords; too bad they never gave up on him! When his grandpa gave him the old wooden flute for his birthday it became one more piece of junk in his closet. That is, until, real life monsters from out of the old stories come to visit. Now, swept away by the magical song of the flute Alex finds himself in the Green, a wild land in which humans are a myth long forgotten. Join him as he rediscovers friendship, heroism, and the magic of his childhood that was once lost.

"From sprites who can't stop chattering to gnomes who exhibit all the worst bureaucratic tendencies of humans the little twists and turns Best has given to the subject make the book (and its sequel) well worth a read."--Amazon Reviewer

"The Magic Flute is a tale full of elves, fairies, trolls, talking trees, mysterious songs, dangerous monsters, and exciting adventures. At its core, however, it is a story about growing up, making difficult choices, overcoming fear, making sacrifices for the good of society, about love and friendship. It is a thoroughly delightful book. Highly recommended."--Amazon Reviewer
Posted by Holly Hook at 8:00 PM