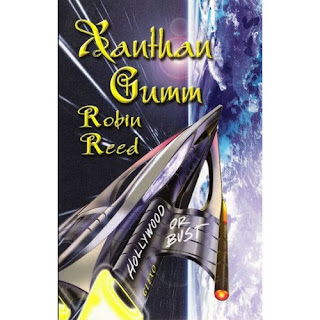 
Everyone in Galactic Central watches The Movies. These wondrous stories come from a planet called Earth, where strange beings called humans do nothing but create them.

One brave framadort converter risks all to go to Earth and become a Movie Star. He will face hunger and homelessness. He will confuse a fast food restaurant with a religion. He will be hunted by an Army General who thinks he is a communist.

Nothing will stop Xanthan Gumm from achieving his ultimate goal; meeting the King of Earth - Steven Spielberg!

"`Xanthan Gumm' was an light-hearted, quirky, charming diversion for me. Xanth is, in a word, adorable. He's innocent, unsuspecting, ever the optimist as he learns to cope in the strange environment of modern earth. Like many other reviewers here I was strongly reminded of Galaxy Quest, but in this case the `alien' chooses to immerse himself in an unfamiliar world. I could seriously imagine this being made into a TV comedy series.

I have always enjoyed a good satire, and the caricatures who romp through these pages are amusing to say the least. Yet, during some poignant scenes, I truly sympathized with Xanth and his friends. Other moments were laugh-out-loud funny (for me, that does not happen often while reading). Serious themes occasionally emerged as the author poked fun at modern American society.

Five stars on Amazon means 'I loved it'. Four means 'I liked it'. In truth, this is a four-and-a-half star book for me. Why did I round up? Because it made me laugh out loud."--Amazon Reviewer


"I laughed so hard, I knocked my reading glasses off my face!"--Amazon Reviewer
Posted by Holly Hook at 8:00 PM