Bargain eBooks #30: Nunzilla Was My Mother and My Stepmother Was a Witch by Terry G. Silver 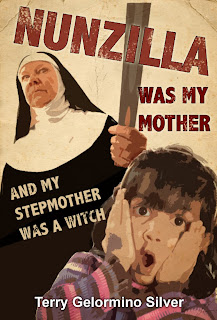 Nunzilla Was My Mother and My Stepmother Was a Witch by Terry G. Silver

Amazon.com (for Kindle)
Smashwords.com (all other eBook formats)


Growing up in a two-parent home during the Great Depression was certainly no picnic, but living in an orphanage run by dozens of nuns was undoubtedly worse.

Just ask Terry Gelormino Silver, the author of Nunzilla Was My Mother and My Stepmother Was a Witch. Terry spent her formative years under the care of so-called pious nuns who acted as if her very existence was a cross to bear. For so many years she kept these memories inside, as if waiting for the proper moment in time to let them out. Well, that time has come, and it is her readers who are the richer for it.

Shining with rare insight and vivid descriptions that ably present a world most people can only imagine, this compelling memoir still manages to capture the magic of childhood and the anxiety of adolescence while granting readers a new understanding of an innocent era.

The author's experiences in three separate orphanages are examined. In the end, Terry Gelormino Silver arrives at some very interesting conclusions, some of which will surprise even those who know her best!

What they're saying about it:
"Terry Gelormino Silver has written an account of her life that should be required reading for all social workers involved with children. Outside of the fascinating story, the facts support the idea that orphanages, with all their faults, were more likely to guide children to a normal and productive adult life than today's foster home system.

That said, the author tells a story so intriguing in its truth that I found it difficult to put it down. As soon as I finished it, I read it again."--Amazon Reviewer
Posted by Holly Hook at 8:00 PM