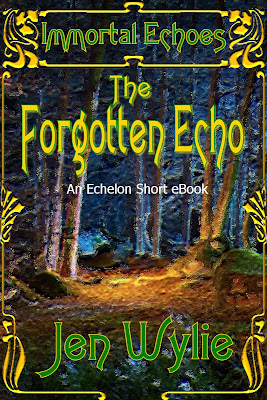 Sometimes death is only the beginning...

Even after the bad day she's had, Cassy is still surprised to find herself shot, an innocent bystander in a drive by shooting. Bleeding to death in an empty parking lot, she knows she is going die.

What she doesn't expect, is the arrival of a strange, and unnaturally handsome, man who tells her he can keep her from passing on in return for being his forever. In desperation, she agrees but afterwards she is beyond dismayed to discover she has died.

To make matters worse, the stranger has disappeared, leaving her spirit to wander through a series of worlds unknown to her. Her existence is one of fear and loneliness, until she meets another like her and discovers she's not a ghost at all but something much more.

"I just finished The Forgotten Echo, and I have to say, it was pleasantly surprising. When Cassy gets shot at the beginning, there are a thousand different directions it can go. I found myself assuming and guessing at what would come next, based on other paranormal books I've read. And the way Jen Wylie took it was completely fresh and new, making me intrigued from page 1. Jen reveals Cassy's new existence and place in the world in a way that keeps you turning pages, wanting to know more. There's plenty of twists and turns and hints at bigger things, something rare for a short story, while still managing to reveal each character's personality and develop them as the story moves along. The entire concept of the story is unique, which makes you HAVE to keep reading, to figure out how it all turns out for Cassy. I can't wait to read the next installment!"--Review by Heather Hildenbrand, author of Across the Galaxy
Posted by Holly Hook at 8:00 PM