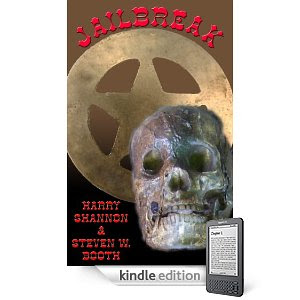 This short story, co-written by veteran writer Harry Shannon and newcomer Steven W. Booth, is a briskly paced weird-western-zombie-apocalypse tale. It is also the first chapter of a new novel called THE HUNGRY, which also stars Sheriff Penny Miller. THE HUNGRY will be released as an ebook and in trade paperback mid-October, 2011, with an introduction by best-selling zombie author Joe McKinney ("Dead City," "Flesh Eaters").

This 5,000 word section has already appeared in "Best New Zombie Tales," the charity anthology "Dead Set," and is in also Harry Shannon's Stoker-nominated collection "A Host of Shadows."

"Impeccable pacing and an eye for the terrifying will leave the reader shaken and unsettled."-Publisher's Weekly on "A Host of Shadows"

"Shannon is a writer who is never afraid to walk into the shadows and drag the things living there kicking and screaming into the light."-Brian Keene, author "The Rising"