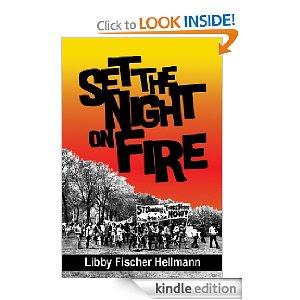 Set the Night on Fire by Libby Fischer Hellmann

Decades-old student protests come back to haunt young people who shared an apartment in Chicago in the late 1960s. Dar Gantner has just been released from prison after 40 years for participating in the 1970 bombing of a Chicago department store in which three people died—among them his lover, Alix Kerr, daughter of the store owner. Now it seems his four remaining former housemates are in peril. When two of them, including Casey Hilliard, die in staged accidents within weeks, Dar suspects Ted Markham, who took part in the bombing but wasn’t charged and is now a U.S. senator running for the presidency. When atttempts are made on the life of Casey’s daughter and remaining heir, Lila, Dar has a compelling reason to protect her. Long-held secrets are revealed, as characters scramble for their lives. But what seems all too obvious to readers about the source of danger doesn’t occur to the characters until the eleventh hour. Hellmann, author of the Ellie Foreman and Georgia Davis mystery series, provides a colorful view of youthful antiestablishment activity in the 1960s, but her first stand-alone comes up short on suspense. --Michele Leber

Set the Night on Fire is a compelling story of love, truth and redemption. This will be a break-out novel for this talented writer. Highly recommended." —Sheldon Siegel, New York Times best-selling author of Perfect Alibi

"A top-rate standalone thriller that taps into the antiwar protests of the 1960s and 70s... A jazzy fusion of past and present, Hellman's insightful, politically charged whodunit explores a fascinating period in American history."—Publishers Weekly