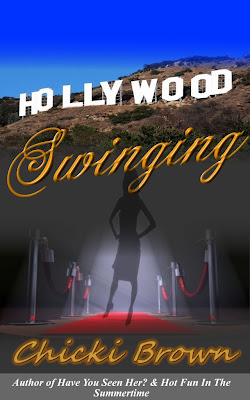 Newlywed author Shontae Nichols Burke is trying to adjust to her life in Hollywood as the wife of actor Devon Burke, one of the film industry’s brightest upcoming stars. She’s left her home and her friends and moved to Los Angeles.

They both have blossoming careers. She’s attending movie premieres and living a life she only dreamed of.

Unknown to Shontae, someone else also believes Devon Burke is the love of her life. When this disturbed woman insinuates herself into their lives, Shontae learns that all Hollywood drama isn’t scripted and finds herself in a fight for her marriage that’s worthy of the big screen.

"Hollywood Swinging will keep you turning the pages and long after you've turned the final page, you will long for the story to continue. It was so nice to catch up on the lives of Shontae and Devin after meeting them in Hot Fun in the Summertime. Shontae, being an author must adapt to Hollywood living when her husband, Devin, becomes the hottest thing on the big screen. But can this Jersey girl handle all the glitz, glamour, and drama that Hollywood is notorious for? You'll have to read it to find out. This book has stalkers, shady in-laws, unlikely love interests and drama, drama, and more drama. I absolutely loved it!!"--Amazon Reviewer

"This book was hard to put down! It pulls you in emotionally (which is always a must for me to like a book) and I was hooked from the start. I really liked the different POVs, I don't know I would have felt the love for Devon if I hadn't been in his mind too. I really admired Shantae's strength...I don't know that I could have been so understanding & supportive. Fantastic read for a great price!"--Amazon Reviewer
Posted by Holly Hook at 8:00 PM