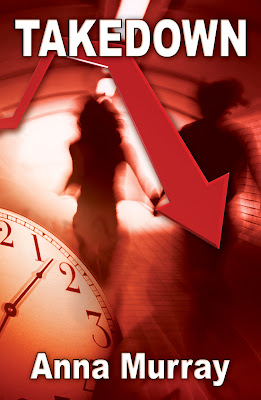 
A web developer and a math professor race to save the world from financial collapse after learning about a plot to crash the US markets.

What if your routine, digital life suddenly turned into techno hell? Jane Nelson's life is transformed when mis-directed emails, criminal chat rooms, murders overheard via speakerphone, and a butt phone call conspire to rock her world.

TAKEDOWN is a fast and suspenseful page-turner, with twists ripped straight out of present-day headlines.

TAKEDOWN is Anna Murray's fourth novel and first foray into the thriller genre. This story draws on her experiences as an IT professional, web developer, and market investor

"Takedown, by Anna Murray, is an exciting, tight story populated by strong characters. From the opening page, the story pulls the reader along. I found myself unable to put down my iPad until I had finished the book in a single sitting!"--Graham Burnette

"Anna Murray spins a great story here, with a superb heroine and a great hero. The plot moves fast and is almost impossible to put down.

Set in 1996, at the beginning of the historic stock market boom, the novel also paints a grim picture of unchecked greed that would ultimately lead to an epic collapse in the following decade.