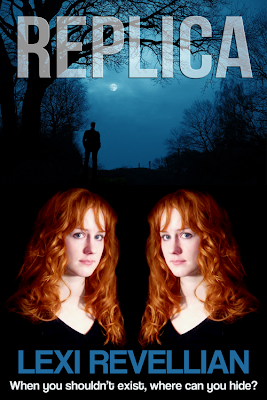 Beth Chandler works in a government research institute, and is accidentally replicated in a flawed experiment. The replica has no official existence, and when she overhears plans to liquidate her, goes on the run. Homeless, penniless and pursued by MI5, she has to learn how to survive on icy London streets. Meanwhile, the original Beth, unaware of what has happened, becomes romantically involved with Nick Cavanagh, the spec op she believes is there to protect her. In fact, he’s hunting her double.

"I bought Lexi's last book by chance as a kindle filler because it was cheap...but thought it was brilliant....this one was even better. Gripping and certainly well written, better crafted than some well known best sellers I have read."

"Replica retains all the fun and excitement of Remix while swapping rockstars and rocking horses for MI5 and sci-fi technology. Like Remix, it's in a genre all of its own - a quirky fast-paced adventure story with a likeable, realistic female lead and a bad boy love interest, that never tries to take itself too seriously. It's a kind of Bridget Jones meets The Bourne Identity."
Posted by Holly Hook at 8:00 PM