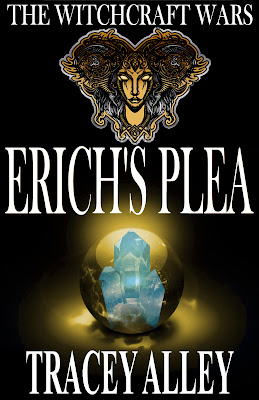 The Kingdoms of Kaynos have been at peace for nearly a thousand years. Now the ambitions of a dark sorceress armed with a new, deadly type of magic called witchcraft threaten to tear the Kingdoms to pieces.

Locked deep in the bowels of Zeaburg's infamous, horror-filled subterranean prison the young druid Slade is haunted by a strange, recurring dream. A dream in which his beloved father, High King Erich of Vestland, pleads for Slade's help.

Convinced of the dreams truth Slade must somehow attempt the impossible and escape the inescapable Zeaburg prison in order to find and save his father.

Gathering an unlikely assortment of allies along the way Slade must not only find a way out of Zeaburg prison but must also find a way to prevent what threatens to be the bloodiest, most brutal war in the history of all the Kingdoms of Kaynos.

Will an unimaginable alliance, an unlikely friendship and a forbidden love be enough to save the Kingdoms of Kaynos?

"This book is full of mystery, suspense, witchcraft, magic, dishonesty, espionage...I could go on and on. The characters are colorful not only in appearance but also in character. Author Tracey Alley has written a very enjoyable book and I really hope that Erich's Plea: Book Two is just around the corner for me to read. I've gotten into the story and characters and can't wait to see what will happen to them next."


"Erich's Plea" by Tracey Alley is a trip into a meticulously designed fantasy world teetering on the brink of worldwide war. "Erich" is High King Erich and his plea is directed, by way of a dream to his imprisoned son, Prince Einreich, better known as Slade. Slade is being held captive in the worst prison in the known lands, one where escape is impossible, but escape is what he must do if he is to assist his father, the king.

Alley does an admirable job of telling a story that is fraught with tension while laying the groundwork for future installments of the "Witchcraft Wars". The tale kept me interested throughout its entirety and turning pages eagerly clear till the end. The story rarely lagged; I felt that each piece of information contained in the pages of the book was integral to the developing story. Finally, I enjoyed the book enough that I have the next installment sitting on my computer waiting for me to review in about a month or so."