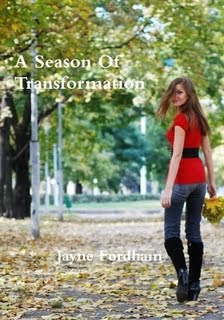 A Season of Transformation by Jayne Fordham

A Season of Transformation is a young adult fantasy/ romance novel set in the contemporary world. It is the story of five young people drawn together to complete a Quest, to protect their town from destruction. In order to defeat the story’s villain, Maxvale, the five virtual strangers must come together and not only forge a bond of trust but become proficient with the ‘abilities’ temporarily bestowed upon them.

In the midst of the lead up to the battle each of the young people has their own personal struggles they are trying to deal with. Lucas, an adopted and bitter teenager struggles to become the person he wants to be whilst developing feelings for Makenna, a rich kid who doesn’t like his attitude. Bonnie is a ‘gothic’ that is dealing with an alcoholic father, Ben the school nerd and Adam the class clown are trying to break free from their high school stereotypes. These five teens need to put aside their differences so they can defeat Maxvale and save their town.

"I thoroughly enjoyed this book. It was engaging and kept me turning the pages to see what was going to happen next."--Amazon Reviewer

"A Season of Transformation is a pleasant and quick read that I enjoyed."--Amazon Reviewer
Posted by Holly Hook at 8:00 PM