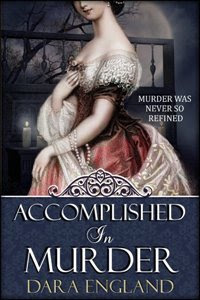 Accomplished In Murder by Dara England

Murder was never so refined…

When her holiday on the coast of Cornwall takes a deadly turn, it is up to Drucilla Winterbourne to uncover the dangerous secrets the inhabitants of Blackridge House will do anything to conceal. But can a proper young lady from London society comprehend the dark motives of a killer?

Accomplished In Murder is the first in a series of historical mystery novellas featuring intrepid Victorian heroines up to their bustles in crime. These works are only loosely connected and can be read in any order.

"I found this to be a delightful read from one end to the other: a creepy house, cast of characters worthy of any great cozy, and an unexpected denouement."~Gina Black

"This was a very entertaining mystery novelette. I can honestly say I was riveted from the get go. I was invested in this story from page one and wasn't about to put it down until it ended. The writing really speaks to the reader, I felt like I had a front row seat to the authors imagination." ~ Cherise Everhard