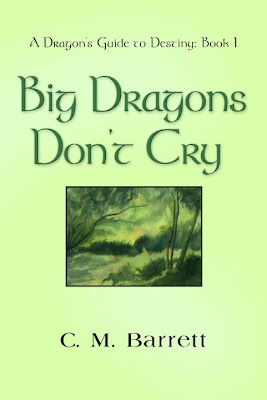 Big Dragons Don't Cry (Book I of A Dragon's Guide to Destiny) By C. M. Barrett


NOW REDUCED TO $.99 TO ANTICIPATE THE PUBLICATION OF BOOK II: DANCE WITH CLOUDS

Morale in the country of Oasis has never been worse. The Earthers, a tree-hugging sect, beg forgiveness for their crimes against twigs and weeds. The Godlies preach penitence and suffering and inspire their followers into submission by threatening them with an afterlife spent being chased by a fire-breathing dragon.

All Oasans fear the dragon in the swamp at the country's edge, and they don't know that he fears them. Druid, a water dragon who puts out fires, steams up when he learns that a cunning opportunist intends to exploit dragonphobia and have the dragon killed so that he can level the swamp for suburban housing.

Tara, a kitten with charisma, is trying to bring humans back into balance. She needs to enlist Serazina, a young human woman who hides her ability to read emotions in order to avoid imprisonment in the Ward for the Chronically Crazy. Serazina's troubles grow when Phileas, Guardian of Oasis, chooses her to be the mother of the heir he so badly needs. Before he can consider fatherhood, he needs to stem the mysterious rumors that he's soft on dragons.

Somehow these four must overcome communication difficulties, mutual mistrust, and delusions of human superiority to save the country. Otherwise, even though Druid doesn't breathe fire, Oasis will be toast.

"Big Dragons Don't Cry is a deeply moving portrayal of man's destructive attitude towards animals and nature which challenges our established notions of dealing with such issues. The author's greatest feat is to deliver this hard-hitting message without ever `preaching' to her reader. Instead, the author creates wonderful characters such as the water dragon Druid and the cat Tara, who form bonds of companionship that override prejudices and illuminate this story.

The author succeeds in interweaving several threads of plot; her deft handling of these different plots allows the story to conclude with a terrific climax. The combination of an important moral message with a swashbuckling sense of adventure reminds me of Avatar.

One of the book's greatest strengths is that it constantly grounds its humour and adventure with an important overriding message - which is one heck of a feat for any author to pull off. This allows the book to pull off its key emotional moments with dexterity and depth.


"I loved this story! The author's writing style is so comfortable to read and everything had a lovely flow to it. Being able to travel back and forth from animals to humans and back again, seemed effortless. And the viewpoints and voice of each character in the book was so unique. One thing the author did that not many do, is to start off with a chart of who is who. I found this so helpful and wish more fantasy writers would do this.

There was a very deep message to be found underlying the interesting plot, but at no time was it heavy handed. It did give a message for us all to think about, but I never felt like I was being hit with a "lesson." Because of this, the story was fun, and fascinating without being preachy.

I had wanted to read this book as I have read a few of the author's short stories and loved them. This writer's love for nature and animals, as well as people, comes through her writing so strongly. But I think that the thing I enjoyed most of all was that this story was also a story of redemption and hope. I am looking forward to seeing what else this writer has to say to us."--Amazon Reviewer