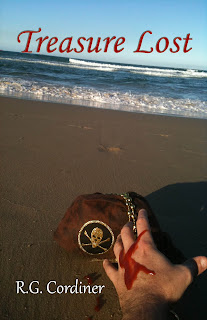 
What do you treasure and how far would you go to find it?

Peter and Farren are two brothers who think adventure is sneaking into a pub or going rabbit hunting. Little do they know! Soon the youths are on a whirlwind \trip of betrayal, daggers, self-discovery and a giant reticulated python! Somehow they have to find a way to stop fighting with each other, avoid a sadistic Navy Admiral and a mysterious cloaked pirate captain, whilst remembering to tap the biscuits on the side of the ship – maggots are never good for breakfast!

“If you came for treasure it lies within, if you did not, what you treasure lies beyond your grasp.”

"I JUST finished this book, and I had to come immediately and post my review while everything was fresh in my imagination....If you are a child (10+) or even an adult who dreamt of pirate adventures as a child -- THIS IS YOUR BOOK!!!!"--Amazon Reviewer

"R.G. Cordiner has written a book that is reminiscent of the tales I devoured and fantasized about when I was young, but it was thoroughly entertaining to me as an adult. I read this story and relived some of those fantasy afternoons of my youth without being made to feel like I was trespassing into a realm meant only for younger people. I would not hesitate to recommend it for kids and ex-kids."--Amazon Reviewer 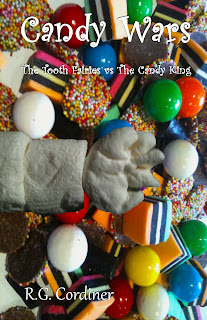 
You may not like your sister, but are you really going to fight a war against her?

James and Emily never get on - always fighting and arguing! But when James wakes up one night as his tooth is stolen by a jelly monster he follows it into a weird and wonderful world. Chocolate archers come out of the walls and fly in bubble gum balloons, giant rock candy trolls roam around, icing sugar snowmen appear and disappear, all under the direction of the Candy King who is preparing a war against the tooth fairies! Soon Emily and their cat Muffins find themselves joining the fairies, with only a toothless dragon and a phoenix with hay fever to help them fight the mighty Candy Army!

“The Candy King is waiting for you.”

"At its heart this is the story of a fantasy land where tooth fairies live when not slipping a few bucks under your pillow. Yes, fairies, it's too much work for just one. When little brother James disappears his sister Emily manages to follow him into the land of the tooth fairies. The fantasy land R.G. Cordiner has created will spark a kid's imagination while Emily and James encounter a castle made of teeth, chocolate-arrow-shooting snowmen, a toothless dragon, and more. Buried inside the adventure are a few lessons they might not realize they've learned about the evils of war and importance of family."--Amazon Reviewer

"For me, this was a very cute story. I enjoy a good kid's story and this one was really a lot of fun! It does make me wonder though... what else does this author have up there in his head? This was a pretty unique story. It felt kind of like an evil version of the nutcracker (and their sugar plum fairies) crossed with a really ticked off gingerbread man. But let me be clear... it's NOT scary."--Amazon Reviewer 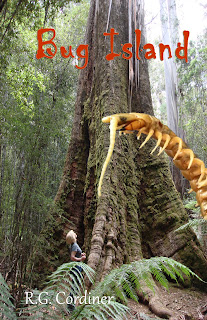 They destroyed the mighty Mayan Empire. What hope for a few shipwrecked survivors?

A South American cruise. It should have been a once in a lifetime experience. And it was. But not in the way they imagined. Barely surviving a horrific shipwreck, the remaining passengers have to try and cope with finding food, water, shelter, let alone the constant arguments. And then there are the bugs. Not the sort that you squish and then get on with your day. Oh no. Toe biters, pond skaters, assassin bugs and harvestmen that drop down on top of their victims - all of these could be found in your garden. But on this lost island they are all at least twenty times their normal size. Trapped on an island with a six metre long giant centipede with armoured plates was not on the cruise itinerary. Now all they want is to get off - without being squished!

"Anyone pack the bug spray?"

"From the first page on, R.G. Cordiner manages to build up suspense at a lightning quick pace and not letting the reader take a breath... The fog is thick... the bugs are huge... and the humans are terrified... There are a couple of surprise twists in the story and the ending had me gasping in shock."--Amazon Reviewer

"I bought this book on nov.2nd and read it a few days later. I can't believe how much I enjoyed it. You think its scary when the fog starts rolling in, wait until its gone. Great reading for kids of all ages.I enjoyed it so much that I hope that there will be a second book in the works. What would happen if the bugs got to the mainland. That is a scary thought..."--Amazon Reviewer
Posted by Holly Hook at 8:00 PM