Bargain eBooks #89: The Discovery of Socket Greeny by Tony Bertauski 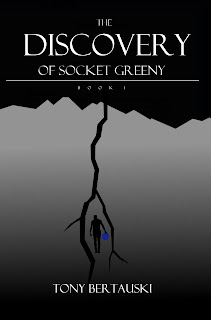 The Discovery of Socket Greeny by Tony Bertauski

The Discovery of Socket Greeny is the first book in a young-adult scifi trilogy that explores love, angst and Zen-like acceptance of true nature in kick ass fashion. Reluctant readers, especially boys, will find this story compelling, enlightening, entertaining, and, yes, even emotional.

Work has always come first for 16-year old Socket Greeny's mother, especially since his father died. But when she shows him the inner workings of the Paladin Agency, he discovers why it's so important. It's an underground world of technological wonder including bat-like grimmets, spherical servy-mechs and humanoid butlers with brightly lit faceplates. They traverse the planet through wormholes to keep the world safe, but from what, they won't say. Although his mother is not actually a Paladin, and neither was his father, both have worked for them for most their lives. Socket, however, is different than his parents. He somehow is a Paladin and soon finds himself in the center of controversy and betrayal when he's anointed the agency's prodigy. He didn't ask for the "blessing" of psychic powers and the ability to timeslice and he doesn't want to be responsible for the world. He just wants to go home and back to school and be normal again. But, sometimes, life doesn't give us that privilege, his mother tells him. And when the world is soon threatened and the Paladins are forced into the public eye, Socket discovers what his mother means. If he doesn't embrace his true nature, life as we know it will change forever.

"What I liked best about the book, though, is its understanding of the essential human condition. Everyone is damaged, everyone compensates or copes as best they can, and everyone is deserving of compassion, even the bad guys."--Amazon Reviewer