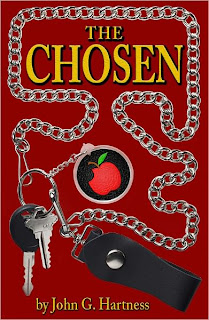 The Chosen by John G. Hartness

The Chosen is a comic contemporary fantasy novel with an all-star cast featuring Adam, Eve, Cain, Lucypher, the Archangel Michael and a few mortals thrown in for good measure. Adam is our narrator as he collects his merry band of misfits on a cross-country road trip with the fate of the world in the balance. Add a few bar fights, a couple of casino visits, a strip club and enough beer to float a battleship and you have a fast-paced first novel that has been compared to the work of Neil Gaiman, Monty Python and Kevin Smith (all in the same 5-star review!).

"I loved this book.

From the first scene where Adam and Satan are playing blackjack together in Las Vegas to the end I did not want to put it down.

It's deeply funny, very well written, both in terms of pacing and voice, and fast paced."--Amazon Reviewer
Posted by Holly Hook at 8:00 PM