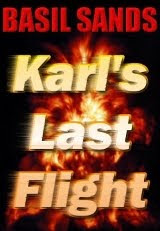 
Karl Alexander was an adrenaline junky. Whether flying Harriers in the Marines, piloting the shuttle for NASA, or as the chief astronaut for StrataCorp Space Flight he was only happy at five Gs. But when his ship crashes in the desert of an unknown country, Karl finds a new kind of rush as he is swept into a raging torrent of the world at the edge of war.

65 Below by Basil Sands


After twenty years hunting terrorists under orders to "render harmless", USMC Master Sergeant Marcus Orlando Johnson, Mojo to his friends, settles into a quiet rural retirement on his childhood home in the Alaskan backwoods. But the idyllic retirement is shattered when Marcus comes across soldiers of America's staunchest enemy who are about to unleash a nightmarish biological weapon on the world from the most unexpected of places. With the help of his ex-fiancee, State Trooper Lonnie Wyatt, and his old special operations buddy Harley Wasner they race to stop a potentially devastating terrorist attack with worldwide implications but even nature is against them as the temperatures plummet to 65 below.


Pastor Michael Farris was a well loved man. Loving husband and father, Shepherd of his church, Courageous minister to the inner city gangs of Columbus Ohio. He helped people change their lives for the better. But when his peaceful life is suddenly shattered by a senseless drive by shooting, a side of Pastor Farris that almost no one knew comes to the surface...a violent shadow of a life that he had been able to keep secret all these years. As he seeks to right the crimes committed against him he is unexpectedly confronted by a ghost from his past, and Mike Farris suddenly finds himself in a race against the clock to stop an insane terrorist from killing thousands, maybe even millions in one fell swoop.


All three eBooks can also be found here on Smashwords.com in all eBook formats.

What they're saying about this author:

"Basil Sands has a knack for blending action and intrigue in an all-too realistic setting. In Karl's Last Flight, the future is reminiscent of our recent past. I just hope there are heroes like Basil's heroes fighting on our side. "-Evo Terra, founder of Podiobooks.com

"Sands is fearless in his storytelling, and tireless in his quest to connect directly with his audience. Big Publishing? Watch out for this guy." Scott Sigler, NYT Bestselling author of Infected, Contagious, and Ancestor

“Basil Sands is one awesome writer, penning stories pumped with enough adrenaline that you’ll suffer from insomnia until you read the last word. This is one writer not to be missed.” – Jeremy Robinson, author of PULSE and INSTINCT

"...keeps one begging to find out what happens next."--Amazon Reviewer
"The plot is well conceived and the writing flows smoothly with the characters, both good and bad, defined. Perhaps as a former Marine, I had a soft place for the primary protagonist, Marcus, but his role stood alone without the need for embellishment." Gordon Ryan, Kindle Author
Posted by Holly Hook at 8:00 PM