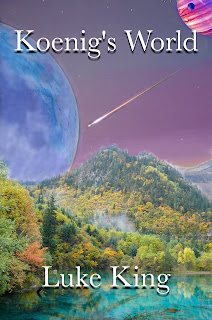 Jacob is alone. Alone on a forbidden planet with only Marron, an artificial human for company. Jacob’s father and sister were killed when their ship crash-landed. There is no hope of rescue. Can Jacob survive when there is something dangerous in the forest?

"On yet another scientific adventure with his father, Jacob finds himself stranded on another planet. His father was so sure there was something amazing to be discovered on Koenig's World, but Jacob is now to discover it alone. A tragic crash and Jacob is left to his own devices on this unfamiliar, colorless world with only Marron, his synthetic man, to keep him company. Unidentified screaming from the forest every night and a distinct lack of palatable food wears on Jacob day by day as he struggles just to survive. It isn't long, however, before Jacob begins to notice some amazing things about this planet; unexpected things that Jacob is unable to explain away. It isn't until he takes matters into his own hands that everything starts to make a little more sense. He may understand this world a little better, but can he survive it?

Engaging from the start, I really enjoyed this book. I devoured it in short order, with each new discovery a tantalizing clue as to what this world was all about. The writing style was entertaining and the plot events rolled out at a nice pace. The story didn't seem to drag at all, with each page just as engaging as the one before it. Jacob is likable, but I found Marron even more fascinating and I rooted for his continued development. The introduction of a new character near the ending led to an interesting twist that added a element of complexity to the overall plot. I felt one of the biggest strengths of this story was the originality of the concept, including the turn of events the led to the final ending."--Amazon Reviewer
Posted by Holly Hook at 8:00 PM