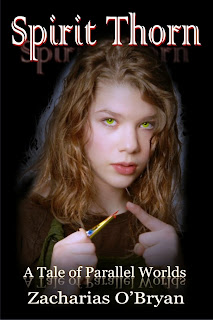 
Spirit Thorn, A Tale of Parallel Worlds, by Zacharias O'Bryan, poses the question "Do parallel worlds exist?" Searching for proof, Professors Rodger & Cassie Swift vanish. Kestrelle, an other-world girl claiming to know their fate, tells their son Braden he must brave a whitewater, tooth-sprouting river into a land where wise vultures predict the future and blue minds inhabit lava caves. Only two powers can help: Kestrelle's Blood Thorn and Braden's vine-painted guitar. (For All Ages)

Spirit Thorn, A Tale of Parallel Worlds, the important new novel by Zacharias O'Bryan, unifies spiritual ethics with both ecological mandates and the mind-bending cosmology of cutting edge physics. Written as a science-fiction/fantasy adventure, Spirit Thorn is capturing the hearts, hopes and tears of all Seekers -- from the precocious ten-year-old to the questing adult.

"... a tale that asks the reader to ponder how our imprinted notions of space and time might require modification if suddenly nothing heretofore known explains such phenomena as the disappearance of family figures and the shifting in space and time of rivers, forests, towns and universities. If you have teens who liked Ursula Le Guin or Robert A. Heinlein, turn them on to Zacharias O'Bryan and his tale of multiverses." --Angus Brownfield, author of The Mechanic of San Martin.

"... I loved SPIRIT THORN because it is a rollicking good tale with marvelous characters. It is both an adventure story and a mystery full of near-escapes, scary creatures, and amazing settings ... There were sections that reminded me of Mark Twain. The speeches that O'Bryan's Earl and the Judge gave to the townspeople were every bit as humorous and clever as the ones Twain's Duke and the King made in HUCKLEBERRY FINN." --Dr. Susan Roper, Emeritus Dean of Education, Cal Poly State University.
Posted by Holly Hook at 8:00 PM