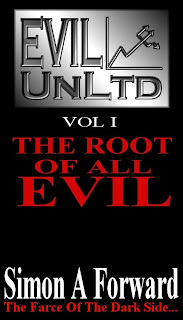 Evil UnLtd Vol 1: The Root Of All Evil by Simon A Forward

The Farce Of The Dark Side. Villains are the new Heroes in this Epic Sci Fi Adventure.

Evil UnLtd: on a mission of indefinite duration, to seek out new evil schemes and boldly go to depths and extremes where no super-villain has gone before.

Sinister supreme genius and super-villain, Dexter Snide, has floated Evil on the stock market and has gathered together a band of fellow villains, whose key challenge now is to ensure that Evil shows a consistent profit.

But Evil has its (some would say unfair) share of enemies: Heroes in all sorts of nauseating shapes and sizes, up to and including muscle-headed action man, Rolph Stengun; and, because Evil is a highly competitive field, rivals, such as the mysterious figure who has his Visigoyle minions shadowing their every move.

What begins as a heist to steal the greatest prize in the galaxy, draws Evil UnLtd into a devious plot to crash their enterprise before it's reached a fraction of its warped potential.

There is one thing of which their enemy may be certain: when anyone draws Dexter Snide into their sinister web, there will be serious disagreement over who gets to be chief spider...

"The story is funny and well-written...and in places there were sentiments witty enough to make me laugh out loud (or at the very least smirk widely).The characters are very appealing; Dexter is slimy but not offensive and his frustrated-evil-genius is very entertaining. Mr Knucks and Evil Robot made me laugh; Tanith Troy is possibly one of my favourite women in some time, and Rolph Stengun (love the name, btw) is not so stereotyped as to not work (his cleaning obsession is a nice touch)."--Amazon UK reviewer
Posted by Holly Hook at 8:00 PM