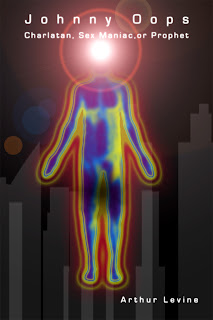 
Are you ready for something unique, something with an edge to it, something that questions your version of reality? Johnny Oops doesn’t know if he’s a charlatan, a prophet, a sex maniac, or even if he’s real, but he believes he’s delivering the word of God. As he crosses the country from coast to coast, it’s hard to decide if he’s more intent on spreading a message of caring and kindness, or in the personal dalliances he has with various women. Decide for yourself if the Dialectic Spiritualism Religion he proposes, which promotes touching others in their private essentials, is a philosophical concept, or an excuse for his unending escapades.

In my novel, Johnny Oops, the surprises come non-stop. Walk with Johnny as he lives with the raging aggressive genes of a genius, spawns a seven-foot tall giant of a son, two precocious telepathic twin daughters named Precious and Pretty and a one-foot tall inner self named Inny. Join him as he races from one reality to another. Discover whether Johnny really is a prophet who can offer salvation and redemption, or a charlatan who pretends he has experienced various rebirths and second comings.

"This book is really different. I wasn't expecting all the twists and turns that led the main character, Johnny Oops from one coast to the other promoting his form of spiritualism and promoting himself as a prophet. Not for the faint of heart, Johnny proves time and again that he is more of a sinner than a saint. I was taken by his questioning of whether we are real or living in a virtual reality world controlled by some game master although in the end he holds true to his belief in God. This author has a distinctive voice, and for a first novel made me interested in reading more of his works."--Amazon Reviewer
Posted by Holly Hook at 8:00 PM