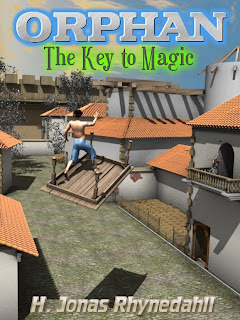 Orphan (Key to Magic I) by H. Jonas Rhynedahll


Orphan is the first book of the epic fantasy series, Key to Magic. Key to Magic is the tale of a young man, Mar, who is the product of centuries of selective magical breeding. Mar is born into an age in which magic is a mathematical science, in which technology is simply another word for magic. The consequences of a world annihilating conflict hurl the infant into a distant mundane future. In this powerless age, Magic has become nothing more than a despised fanatical religion. Its practitioners are hide in the shadows of a world that rejects them. In order to escape a destiny that magicians long dead have written for him, Mar must learn to use the inborn abilities that make him the last true master of magic.

"This is an excellent epic fantasy novel that has an interesting, complicated plot. The characters are well developed with complex backgrounds that are told through chapters that flashback to previous or historical events. The fantasy world is vividly described and the cities and cultures have depth and life. The magic system in this book is different than other magic systems in other fantasy series/novels. It avoids the repetitious fireball magic that most fantasy authors lean on.

The main character, Mar, has some formulaic characteristics, but is actually not the standard one-size-fits-all heroic figure. There are only bits of his history in this novel and I expect that the rest of his story will be told in the next books.

The end of the book is all action and fast paced.

If you are a fan of The Wheel of Time series, Lord of the Rings, the Saga of Recluce series, you will like this book. It is an entertaining and captivating read to the last word. I can't wait for the next book in the series to come out."--Amazon Reviewer
Posted by Holly Hook at 8:00 PM